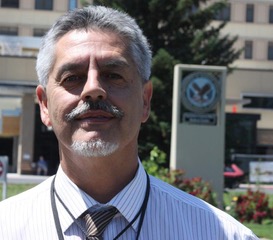 I am a Navy veteran who served during the Vietnam Era. During my stay in the military, I suffered through the death of my best friend and one of my brothers in a four month period. There’s a lot more to the story, but suffice to say it was during the “pullout.” I was offered a General Discharge Under Honorable Conditions, and I regrettably took it. If I knew then what I know now, I would not have taken the offer and tried to stay in the Navy. Anyway, this led to a couple years in jail, a drug program and years more of chronic gambling and substance abuse, mainly alcohol. After going through a divorce and bottoming out in 2003, I was connected to the VA Medical Center and began attending groups in SATP. The director at that time became my mentor as I (for the first time) became very serious about recovery. He encouraged me to go back to school, at age 50, so I could become a drug and alcohol counselor. I did go back to school, and for myself it was like studying my whole life under a microscope. All the while I was getting mental health counseling at the VA and attended a VA invitational aftercare group through SATP for seven years whenever I could make it.

During this time I shared a residence with someone who was also in recovery, but he kept relapsing on methamphetamine. When he did relapse, he became violent toward me, causing me to pack up and leave on two different occasions. I was sleeping in my car while attending school when my mentor Paul Nicolai, VA Substance Abuse Coordinator, told me about Grant and Per Diem transitional housing through the VA. I moved in to GPD and decided to keep going to school, working toward a Bachelor’s Degree in Social Services. I held several jobs: I did a practicum with the Healing Lodge of Seven Nations and became the probation officer with the Kootenai Tribe of Idaho until the grant money ran out; answered phones on the Crisis Line; got a job at the Airway Heights Prison for six months after completing Correctional Officer Training and becoming a “facilitator” of their Right Living Program; and worked at two work release houses run by Volunteers of America.

EVERYTHING I TRIED ON MY OWN DID NOT LAST!

After I got the job at the prison, I moved out of GPD housing and got my own apartment. But when that job ended I once again fell flat on my face, and the VA (Healthcare for Homeless Veterans) offered me a place again in transitional housing. The job with VOA allowed me to get an apartment utilizing the HUD/VASH voucher; everything was going good until that job ended when that grant money also ran out. Now I really did not know what I was going to do, until I was approached by the VA. I was offered a four year term position to work in the Homeless Veteran Supported Employment Program, with training. I became a Vocational Rehabilitation Specialist and got an online certificate with Virginia Commonwealth University. Two years into the job I was offered a permanent position as a housing specialist for HCHV. Two years later, I was told I should apply for the Community Employment Coordinator position that was new to this VA; I did and was hired to do the job I do now.

THANK GOD FOR THE VA MEDICAL CENTER AND THE FACT I WAS ABLE TO RECEIVE SERVICES FOR MENTAL HEALTH COUNSELING, SUBSTANCE ABUSE, OTHER PHYSICAL INJURIES AND AILMENTS, TRANSITIONAL HOUSING, HUD/VASH VOUCHER, AND EMPLOYMENT!

“There but for the Grace of God go I!” How many times a day do I remind myself when I’m reaching out to help the veterans I get to work with. How often do I count my blessings.

Over the years, I have learned from my mentor Paul Nicolai, John Davis and Kevin Bratcher (who first hired me) to Lily Haken and William Malloy (who hired me for this position). I learn from all the staff members I work alongside, which includes my current supervisor Shannon Dunkin and many other VA senior leaders and co-workers. Most importantly, I learn every day from the veterans I get to serve. Because of my own story, I know all too well how services have to be individualized, that every veteran is in a different situation toward getting their physical/mental health care needs met and a different stage of readiness toward self-empowerment and independent living.

My job description encourages me to act as a “change agent” for the veterans I am able to help. The more I network in the community and collaborate with other agencies and providers, the better I am able to do that. The more I meet with employers and HR departments, the more I can help veterans find suitable long-term employment opportunities. Many times I am called upon to “just be there” for the veteran and lend an ear to help him/her through some difficult times, just as many were there for me as I trudged this sometimes arduous road toward a better living and a better way of life. Thank God for the VA, the services they provide and for all the help and opportunities they have given me.

This is my personal success story!